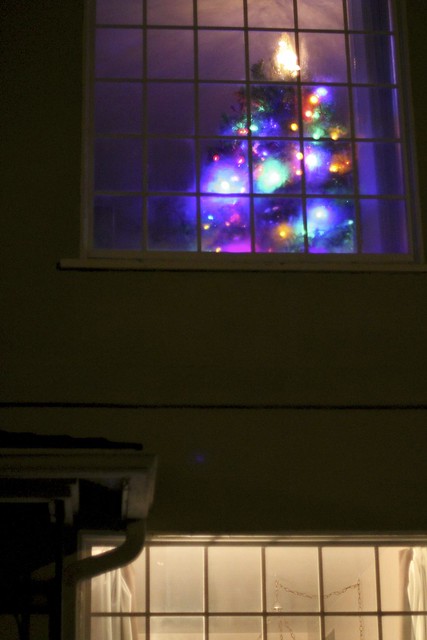 And there is was, the shot of the night; the neighbors window.

I worked all night. I worked to get working. And there it was.

World, love me too. Love me back.
Night. 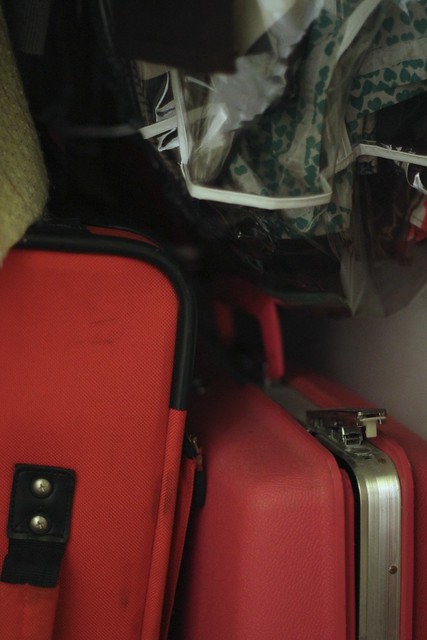 I had a wonderful and indulgent story written, or built, for this evening. It still is a relatively fun one. Fun indeed. Michael, at least once, I heard say, "Have you SEEN her take out The Pink Suitcase?" It is wonderful, I suppose, when putting it in the true spectrum of our human experiences, to learn you have made a true lasting, entertaining, and sweetly enough, endearing, impression. He will always be with me, and he will on occasion, as the years come to pass, reference, in playful jest, My Pink Suitcase. 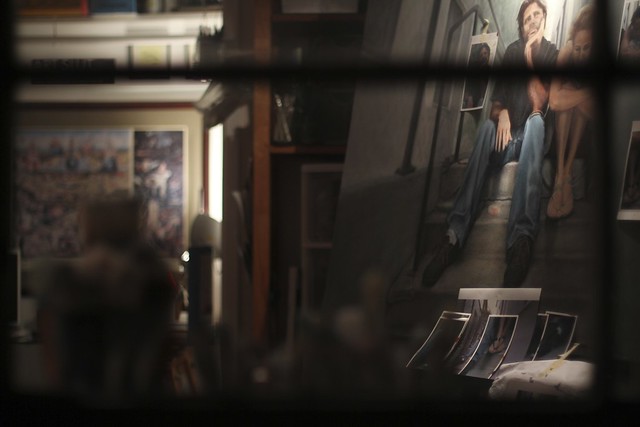 I will have to more directly implement the discipline of Self-Portrait Tuesday on my next run. I tried. I sort of tried. I'm feeling queer taking pictures of myself, so I'm attempting to do abstract versions, and in that attempt, well, this is just where my head is at. I don't know what I'm going to do with it when it's done. I don't mind over working it. It's the relationship with the canvas and the meditation involved while painting I prefer. The suicide thing has been on my brain. Not the dead thing. The suicide thing. It's different. The loss is quiet. That's the dead thing. I feel like I'm owed a fight. Not that he would ever fight with me. He trained me well. It would get me nowhere. It would get me alone. What an ass. I can't believe he left me. Tell me he loved me. Did he forget about me. Oh god, he was always such a selfish prick. I'm just starting to become a little angry with him, and not even really for the suicide thing. More so for the not fighting thing. I nicknamed him Jackass so many years ago, I have pictures of it written on his birthday cake. I need to get a new boyfriend. FINE, maybe three. Uh, that's so much work. No one's paying attention to me… I'm all over the map. I'm going to stop writing now. 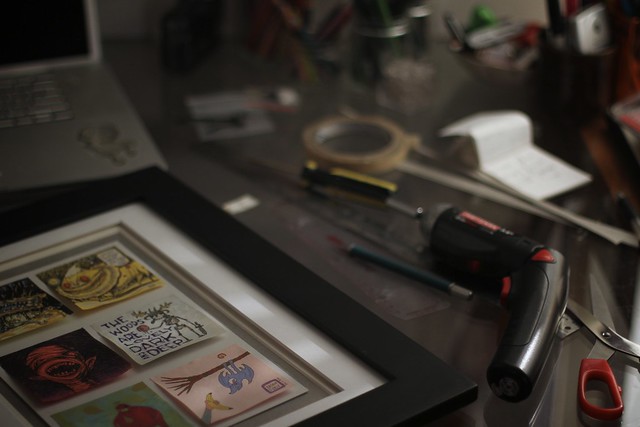 So the Post-Its. I spent yesterday matting and framing. It all started because one of them was a gift, and the creative bug just started moving in that direction. Somewhere around 1AM my brain just wouldn't do fractions anymore. I had to stop. I gotta tell ya, if I lived any closer to that joint, I'd be back buying more.

On to the next step. I think I need to do some work on my painting. We will see. I will report back later. 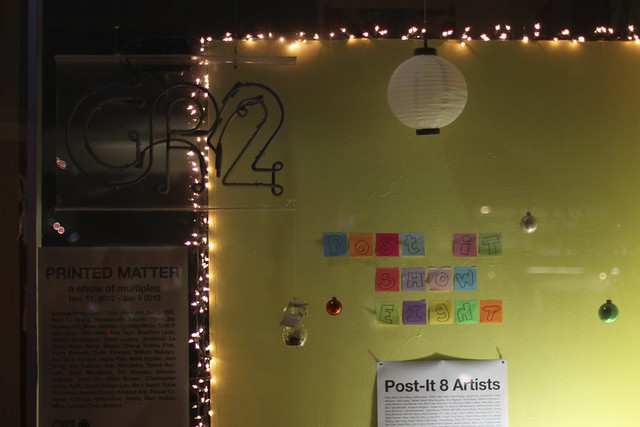 Giant Robot has a Post-It show each year. Like most shows, it opens on a Saturday. I of course work, and not that I couldn't make it, but the line to get in starts in the early afternoon. So, as I burned on Instagram, "A day late and now more then $300 short…" More then 260 artist, and several thousand Post-Its. $25 a pop. I told myself to get one; it'd be part of the adventure. I bought a dozen, no lie. I'm not an art collector. I'm an art maker. In my world art is a gift, possibly a trade, an even a debt when a wager is lost. I can't tell you… IT WAS SO MUCH FUN. 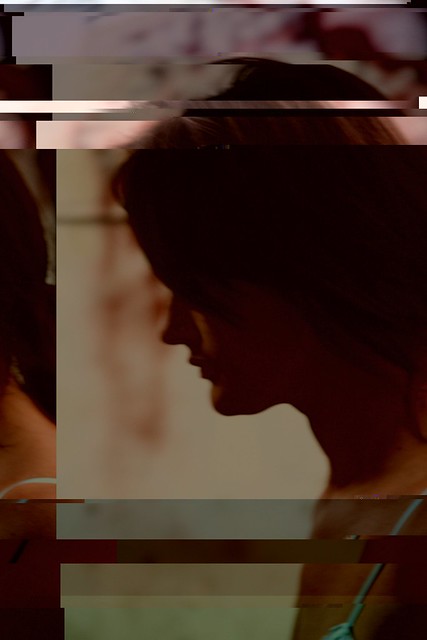 I usually take the picture, then the words come later. This one the words came first. I remember where I was sitting. I remember the light; the color of the day; the temperature; the way the air felt against my skin. It was just before I went to Hawaii. I've worked on it since then. I've been playing with Glitch Art. It's become another side project, aside from all my projects being side projects. I just need a laptop. I disrupt the image files a number of ways. Most commonly, thus far, I use the encoding from two files together. Sometimes I'll put pieces of a color jpg file into a B&W, or the other way around. Sometimes I'll use audio files. I'll actually pick a song to distort an image. It's a hell a lot of experimentation that evolves into controlling the chaos. It's a temperamental medium. Almost immediately, without design, this medium provided me with platform to work with images and content privately. For example, at one point I figured out how to isolate the portion of the code of Spence flipping me off. I used that piece of code repetitively in a picture of myself. This was the end result. Mind you, I didn't just toss it in. Time and time again files break or the image just falls apart. These pieces takes hours to days. Each one having new limits and new boundaries on what it will withstand and how it will respond. Never mind I alter my tasks each round with my constant drive of "now what?" type experimentation.

This one began with the phrase, "I've 'come accustomed to the silence." It was that day. Sitting on the bench. I watched the color of the wall change from one orange to the next where the sun was present. It seemed like I could hear the light screeching throughout that same mass of air that surrounded me. I could hear the fucking sun. How quiet was my brain if I could hear light. That's when I noticed how quiet it had become, and noticed I hadn't noticed it. The conversation; the ten year radio noise of a single solid conversation had come to a blunt stop when Spence just suddenly no longer existed. That's when I noticed I'd 'come accustomed to the silence.

Spence took this picture of me a number of years ago. I look different in all of his pictures, then I do in my own. I always have. There's a softness to me that I just plainly don't see in myself. I've always thought, "Really? You think I'm so sweet?" He always told me I was super sweet. Not funny. Never smart, or independent, integris, strong, outspoken. He'd just mix it up with some nickname he'd developed for me and tell me "I think yr super sweet!" He would rationalized away behaviors in others that he detested, with, "Well, I figure, if Erin does it, and yr super sweet, then I guess…" With him, my identity slipped away. I never talked too much, nor was I ever aware that I talked with my hands. I was never hyper, and never in charge. Though looking back now, something I realized within a week or two of his passing, like a bolder laying quietly in the sand, I was always our rock. And here I am now, quietly, softly, and fractured with abandonment, alone, with that sound of the sun light humming in that cavern in my head. 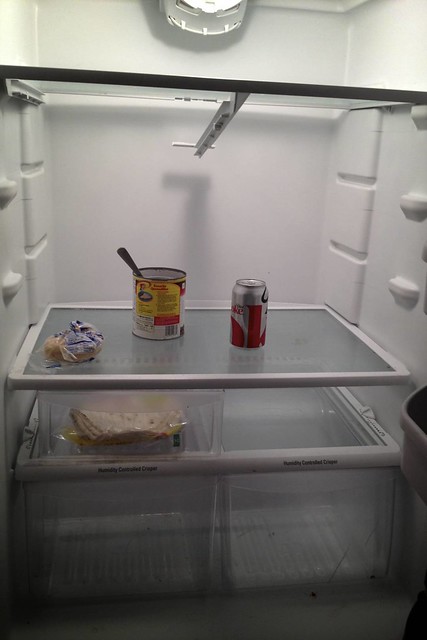 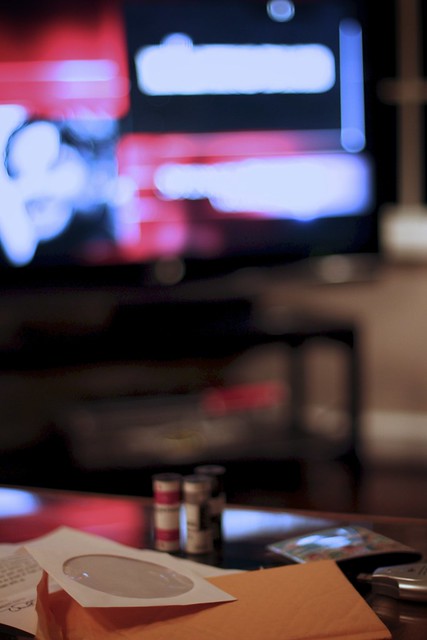 Mail today. I saw it as I crossed the lawn. Fluffy yellow envelope that stuck out because it couldn't quite fit into the box. Dark wings. There's a phrase in a book, a set of books, "Dark wings, dark words." In these books, ravens carry messages. Since Spence's passing the dark wings come as emails, phone calls, and occasionally a package. I don't know what they contain, but when I see them arrive I know my day will be dark.

Today I received the In Memeorium reel that was shown at the awards this year, from the Emmy's people. I was the one that had the archive of Spence stuff, so it inevitably was me, in those last few days of preparation, to put it together. I was granted Spence's ticket for the awards ceremony, to be there in his stead. I was unable to attend, so had not yet seen the reel.

So today, dark wings. The photograph I took of him, from that New Year's Eve party, next to a caption of his name and his work title, are still frozen on my screen. I realize it's still there as I pass throughout the house. I am apparently not ready to be done with this moment. 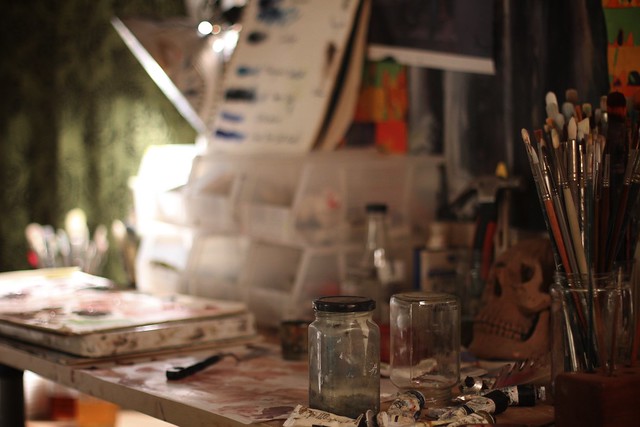 Studio. It was late. LATE. Figured I'd shoot the project. I find I actually contain my mess pretty well. A fair portion of the studio has a vacant empty thing going for it; nothing but a row of theater chairs and a large empty frame on the wall. We move forward 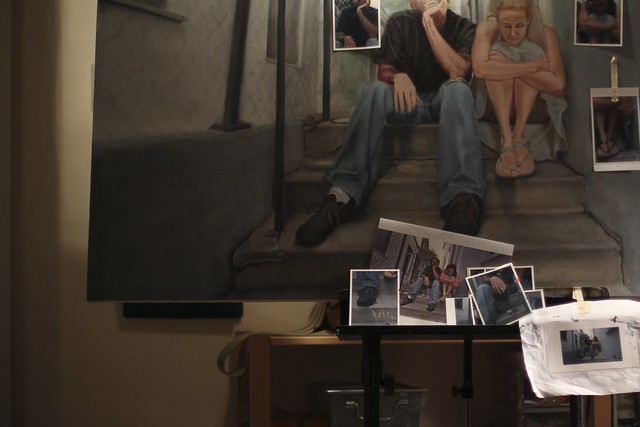 I let last night drop. I've been painting and arting for days. It was well past any reasonable persons bedtime before I realized I had yet to shoot. With no inspiration for a photo, and the fact I now needed to double down, I chose to give a little more then I am comfortable with, and show the piece I'm not discussing. I have it facing away from the studio door so that it is missed when anyone walks throughout he house, in addion I also close the studio door as well when I have company on occasion. I work in layers. I use transparent paints. I've only begun on the flesh tones, and the painting itself has countless layers left to build upon. It could come together, or it could completely fall apart, at any time. I don't want to go to work tomorrow. I want to stay home and paint. FUCK, I haven't paid rent yet. Settled. Go to work to pay for rent to have place to paint.